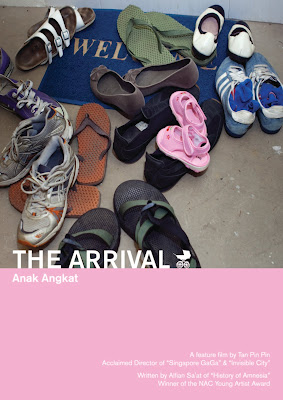 The Arrival is a feature film by Singapore director Tan Pin Pin, with a script by the talented writer Alfian Sa'at. The film focuses on Aishah who, together with her husband, has always wanted children and eventually adopt a baby. Her journey into parenthood is one in which she struggles through guilt to learn the meaning of love, grace and compassion.

We developed print material - poster, flyer and postcard - that the director could use in promoting the film to potential investors at a regional media trade event and in Singapore.

The director's brief was that the material should tell of a local Singaporean family, while adopting a quiet, understated aesthetic. Our challenge was to create an image that could speak of, and invited some curiosity about the film without using any film stills or images of the cast (as neither was available).

Among the many images we thought of was the familiar sight of shoes scattered about a used "Welcome" mat outside of a HDB flat. This is the physical threshold and point of entry of a home, where the motley array of shoes would usually mean that family and friends are gathered within. We therefore decided to draw upon such an image for the sense of anticipation of a possible drama beyond such a door doorway. Attention was drawn to a child's shoes by extending the use of pink for the rest of the poster/flyer.